I have been very excited as I have finally been able to take a Robert Liberace course on drawing the figure. Granted I could not swing the full course with critiques but I took the one with the class and auditing the critiques. It has been very exciting and inspiring to say the least. I have admired his work for some time especially his drawings which I think are exquisite and he has such a large knowledge of anatomical parts of the body. You should look him up

I have always loved drawing the figure and got a good base at the Schuler School where I went in the late sixties early 70"s but they did not teach the figure per se. They did however give me a firm base of anatomy and schematic drawings on  which I have built ever since.

Our first couple of assignments were the torso of the male figure. here is the first one i did 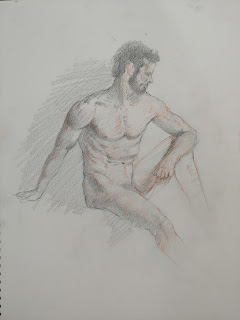 Here is another and the Ecorche drawing I did of the same figure. This was a lot of fun though hard 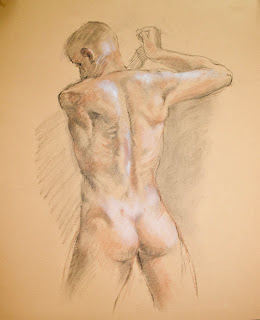 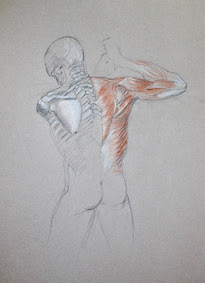 We proceeded tp painting after that and ended up with the portrait. Below is my first attempt.We focused mostly on the torso but i would like to finish this one as i like the way it has developed. I am working on two others and a portrait that i will post later.
This has been a very satisfying experience.
Till next time 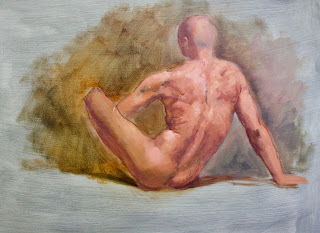 Posted by Anne Kiefaber at 9:14 AM No comments: