It seems that I have neglected this blog for awhile. I have been involved in doing illustrations for my son Dave K"s chapbook, and undertaking a rather involved restoration piece.

This painting came to me in pieces since much of the paint and canvas were missing as well as loss of paint where the canvas was intact . At least the figures were more or less intact.I accepted this job in the summer since I had an intern interested in watching a restoration project but unfortunately by the time I had it back on the stretcher and ready to do the patching the summer was over and she was back to school- unfortunate since this would have been an interesting project to watch. 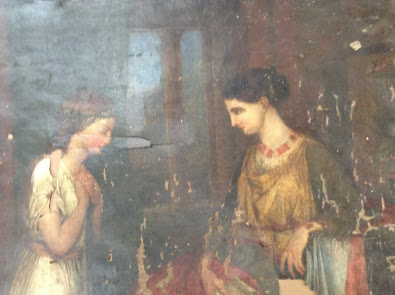 The first thing I did was reline it with a new canvas then I had to fill the the holes where the old canvas did not exist any more. There were a number of gaps and this step took me me quite a while. 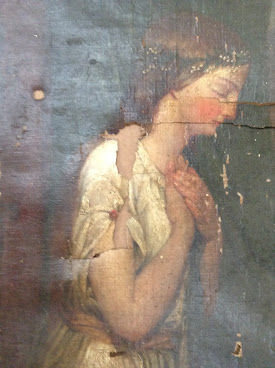 Here is an image of the left hand figure which shows all the gaps in canvas and paint.

This painting reminded me of the Pre-Raphaelite school of painting of which Dante Gabriel Rossetti. and John Everett Millais were the most prominent. They were a group of painters, poets and art critics modeled on the Nazarene movement who attempted to revive spirituality in art.  This movement started in Germany and was termed nazarene because they clothed their figures in more Biblical raiment.  They sought to return to the abundant detail, intense color and complex compositions of the early Renaissance. preferably before Raphael,

The Pre- Raphaelites were interested in medieval art so there is a spiritual component to their works. Although this painting makes me think of this group, it is far less developed than they were in composition and execution but it retains the feel of this group.  This painting does have its figures in biblical raiment but it also has a medieval feel because they are in a chapel setting  and one is praying

I was conscious of these elements when  I was doing the pinpointing since the clothing was done with impasto but the background and figures were more smoothly painted.

I am still working on this painting since the owner brought to my attention some elements in the background that my camera did not capture. There was also so much loss of paint that it could not be seen.

I will update you on this painting as i move forward. It has been an interesting process

Posted by Anne Kiefaber at 2:13 PM No comments: