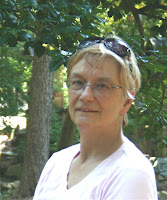 My name is Anne Kiefaber and i have been an artist and teacher for over 20 years. I was trained at the Schuler School of Fine Arts in baltimore then went to Paris and studied both at the Louvre evening school and at the Ecole Montparnasse.


Though I am primarily a landscape and figure painter, I have recently been fascinated by  the still-life. i must say the show at the North carolina Museum last october on the still-life really got me going and i have been attempting some rather difficult concepts 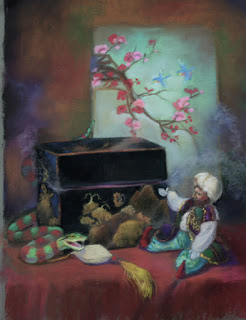 The still-life pictured here is an example- Its called "Pandora"s box" and it is the first of a series. I have never really done a series on the same subject before but the idea of pandora's box containing all the ills that we now face is rather fascinating. This one is a pastel done on canson touch paper. The box is barely opened and already evil personified by the snake and the beginning of pestilence are shown here. The picure in the far back has flowers and blue birds which give hope. I used mostly softer pastels to indicate the mists and to get a high color key. i have since added a locust so i will send a later post to show you

If you are interested in viewing more of my work visit my website at www.annekiefaber.com
Posted by Anne Kiefaber at 10:08 AM