It seems like it is time for me to write another post on my blog. Although I try to be regular about it, it seems time simply flies by me. Therefore when My son Dave, who is a writer in Baltimore sends out his blog, I know its time for me to write mine. He is amazingly regular. he writes on tiny letter if you want to check him out.
Actually I have been working on a number of things: The first being a conservation of a painting for my sister.It's rather large 28 x 26 and it was supposed to be a tempera on canvas. However I discovered that it is actually an oil though it could have some tempera in there somewhere. There was a period before Van Eyck finally found the good oil paint formula when they combined the two. This painting though dirty was really full of fly feces which had to be removed by scraping gently with a scalpel-. here is an image of the painting 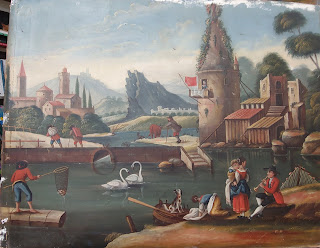 I also had to add a new piece of canvas to the edge and discovered the painting had been reduced so I added the piece back after consulting with my sister. I am still working on this painting so I will take another pic when it is done
My sister has a good friend Emily M who likes my work and she really liked a piece I had done several years ago and sold, so I told her I could re-do it in a different format so I did working on Uart paper rather than pastel mat ( my favorite paper) and adding some tops of buildings . I also handled the foreground darks slightly differently with a combination of purple, blue, dark brown and very dark green- no black at all.  I also wanted to get the detail of the electric wires and lights more precisely which  the Uart paper allows you to do.I liked the way it turned out 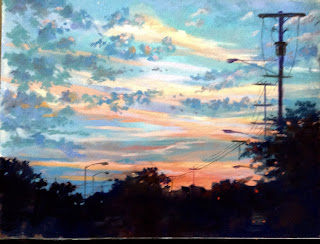 It is going to go to a friend of hers in California so I will be packing it myself before sending it off.
I also have been working on a color values workshop which happened last sunday. We worked in gouache because the mixing mimics oil painting but dries faster considering it is a water based paint. Although only a couple of students attended, i think it went well and hopefully it will impact their future paintings. here are a couple of examples of my studies for it 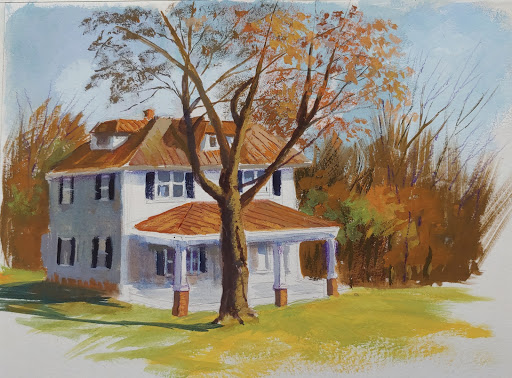 This is a house in Gettysburg. I did it using a limited palette of cad yellow ,orange, a carmine red, ultramarine blue, prussian blue and black. Very interesting the color mixtures one can make with just 3 of this colors. This one I used yellow orange and blue
Next time I will show you the window encased in stone and explain the mixtures I used in that one so until next time.
Posted by Anne Kiefaber at 7:08 AM